Oops! It appears that you have disabled your Javascript. In order for you to see this page as it is meant to appear, we ask that you please re-enable your Javascript!
Skip to content

The Wild Ginger Brewing Company approached me through their PR wanting me to review their new line of alcoholic craft soda. It’s not my usual topic, I try to stick to craft spirits, the craft soda business is much different. It’s more akin to craft beer. I don’t write about beer at all. It’s just another language! 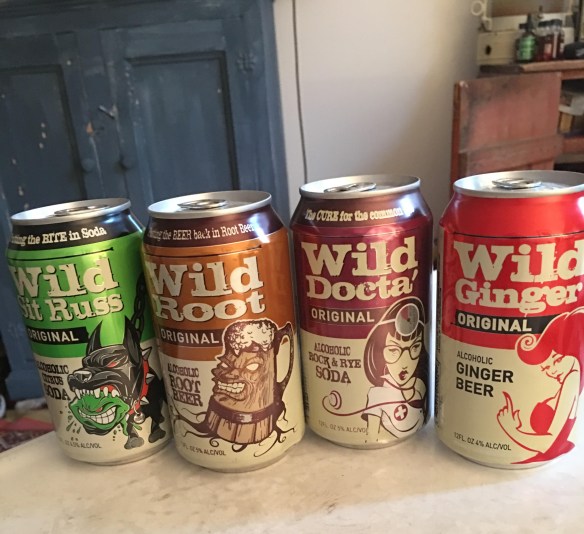 Imagine my surprise and delight when four ‘hard’ sodas of various alcohol by volume from 4 – 5% arrived at my door. I love craft soda, the kind without alcohol… it used to be one of my topics a while back. Anyhow this lineup of colorfully cartooned cans were waiting to be tasted. With the craft beer boom, top quality beers are being canned in colorful, artist attended vessels. These are no exception with a funky sense about them.

The first one that I opened was the Wild Root Original. Smacking of herbs and good old fashioned Root Beer goodness, this is as close to what I remember from my boyhood, when my father would put some of his Haig and Haig in my root beer to keep me quiet. It was a good representation of the buzz anyhow. I remember it all these years later in a sip. And what a delicious sip it is. The Wild Root is chock full of spice as well. It’s brilliant with large ice and fine bourbon whiskey- like the Barrell Bourbon #010 version that should be out any day now. It’s that good.

The Wild Sit Russ Original.. with a snarling dog on that brightly festooned label was my least likely to enjoy, yet one of the ones that tastes the most true to form. The label reads alcoholic citrus soda, there’s that snarling dog and all I can think about is Mezan XO Rum. Smacking of herbs, spices, an element of tonic from the citrus oils- this wild soda is screaming for funky, dunder laden rum that only can come from Jamaica. No other place in the world makes rum like this and no other soda should taste quite the same. I don’t always recommend mixers with this rum, but the Wild Sit Russ Original (who was Wild Sit Russ I wonder, oh, no matter) it’s good soda. Great with Mezan Rum.

The Wild Docta’ Original Rock and Rye is way too sweet for me, but with that said I mixed some really amazing barrel aged Rum from Barrell Whiskey with a splash of this ‘rock and rye’ type soda. It dried out the sweetness immediately. It’s more of a millennials drink than I’d like to admit. They’d love it to no end. With that Barrell Rum, it’s so far over the top that I’m heading for a Hemingway Daiquiri right now. I’m not a big sugar in drinks fan.. Mark my words on that.

The Wild Ginger Original Ginger Beer – Alcoholic, like the other three soda pops is a thing of rare beauty. There is an underlying element of spice that swirls around my tongue. It’s a bit sharp, but the bubble spins in an undulation that is gratifying and bold in every spin around my mouth. There is alcohol in there, you cannot miss it. This element warms as quickly as it pours down my throat. I’m charmed immediately and my palate calls out for something to deepen the spice element of the slurp. I chose a bottle of the Mezan Guyana Rum. This rum, distilled at the Diamond Distillery is a thing of rare beauty. The Ginger Beer mimics the funky elements of the Guyana Rum, the smoke and char from the barrels and the sweetness from long aging in hot climes. To mix this rum would normally be a sacrilege, but I have good feelings about this alcoholic soda. Try it. Let me know.

In conclusion, all good stuff, probably too good for the marketplace. The funky can art is creative. It’s a Millennial product. Flashy. Bold. The soda is pretty darned good; I’d like to say that they will be used as a mixer. A fine mixer at that. Best of luck to them! Cheers!

The Wild Ginger Company is doing a fine job.