“What’s in the bottle is not what’s on the label,” says Warren Bobrow, handing me a small apothecary jar of amber-colored fluid. Inside is a top-shelf rum, he says, infused with high-grade marijuana — specifically, a strong indica-dominant hybrid known as Granddaddy Purple. Yet, despite containing such a notoriously aromatic additive, the liquor does not reek of dank weed. There is, however, a noticeable difference in taste: a pleasantly herbal, almost minty, flavor on the tongue.“Isn’t that delicious?” he says.

Bobrow, 55, is the author of several cocktail books, including the highly regarded Apothecary Cocktails. His latest is titled Cannabis Cocktails, Mocktails and Tonics: The Art of Spirited Drinks and Buzz-Worthy Libations. It’s the first of its kind — a collection of 75 recipes devoted exclusively to marijuana–spiked drinks. And to hear him tell it, the effort brings together two disparate cultural groups. 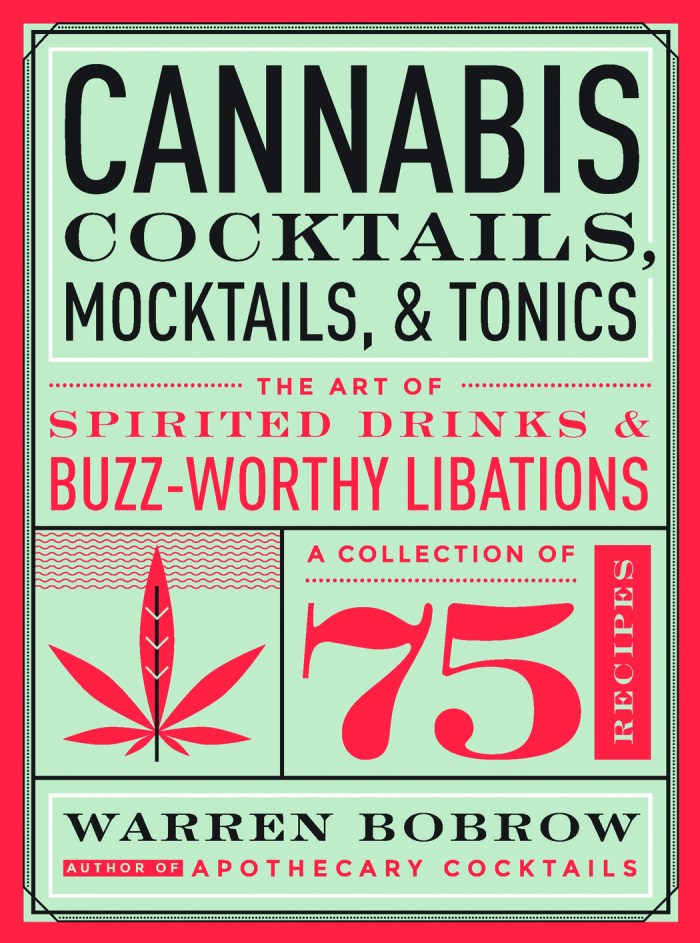 “You have the drinking people who look down on pot, and you have the pot people that look down on drinking,” says Bobrow. “What I wanted to do was get them both to play nicely in the sandbox, and they actually do. And the real fun of it is, not any one thing becomes overpowering. I’m all about balance in my cocktails. They have depth of flavor, they have character.”

We’re sitting outside in the courtyard at Roberta’s, the wildly popular restaurant in the artsy Brooklyn neighborhood of Bushwick. Bobrow has just finished up an on-air appearance for Heritage Radio inside the restaurant’s tiny in-house studio. But the setting is more than merely convenient, it’s apropos. Roberta’s famously hosted a “three-course, two-cocktail weed-heavy tasting menu” chronicled by GQ in 2012. “I really should fire one up just out of basic pretense,” says Bobrow. But we refrain, at least until leaving the premises.

Though America is becoming more tolerant toward marijuana use, with laws in many places changing to reflect that, the issue is much trickier with regards to licensed establishments like bars and restaurants. Bobrow notes that the federal Alcohol and Tobacco Tax and Trade Bureau considers it illegal to infuse alcohol with cannabis, which makes the subject a nonstarter in a commercial setting like this.

“You should not do this in any bar,” says Bobrow. “If you do it in a bar, you’re taking a great risk to the liquor license that belongs to someone else. Do it at home. Hang out with people who have cancer, who need medicine. Make them a cannabis cocktail and see the healing that it offers and the pleasure that it offers to someone who’s really sick. That’s why I wrote the book — not for the college student who wants to get his fraternity as blasted as they possibly can on spiced rum punch mixed with cannabis tincture. I know they’re going to do it. This book tells everything. But that’s not the intent.”

Any halfwit can dump a bag of dope into a bottle of hooch and create a very potent potable if he waits long enough. Bobrow’s handsome how-to manual instructs you on ways to treat cannabis like a true cocktail craftsman regards any other valuable ingredient. “I love getting stoned, like anyone else, but I don’t want to drink something that looks and tastes like mold,” he says.

The book suggests ways to infuse cannabis into everything from absinthe and condensed milk to maple syrup and cocktail cherries. It even offers tasting profiles of several popular marijuana strains and recommendations on which strains pair best with which spirits.

Like many culinary-cannabis enthusiasts, Bobrow is a stickler for decarboxylation, a technique to essentially pre-cook the cannabis in order to properly activate its psychoactive and otherwise therapeutic chemicals. The book details two methods to this end: the very fragrant approach of using a basic oven and a less odorous sous-vide option of boiling the stuff in a bag. One trick not mentioned in the book: Bobrow says you can even use a microwave. All you need is a microwave-safe container and an oven bag.

The book also explains how to use lecithin powder, a common supplement found at most health-food stores, for an additional boost in any cannabis-enhanced concoction. “Lecithin is an emulsifier,” Bobrow explains. “It’s also brain food. It’s what your brain is built on.” One tablespoon of lecithin per cup in an infusion “supercharges” the cannabis, according to Bobrow. “It goes from 0 to 60 to 0 to 1,000,” he says.

That said, responsible use is a big emphasis of the book, which repeatedly warns against over consumption and driving under the influence, as well as avoiding the infamously disabling stoner condition known as “couch-lock.”

“I want to see this as a source of healing for everyone,” says Bobrow. “I don’t want to see it just for people who are really, really sick. I want to see everyone find relaxation and comfort in it, and to know that they don’t have to drink 10 drinks to have a good time. They can have one cannabis cocktail and be totally satisfied.”